The Boycott SodaStream . Oxfam Debacle has backfired on the BDS Movement Exposing its Platform of Hypocrisy & Hatred That Hurts Palestinians Most Of All

Lets examine the facts: Sodastream is an alternative to Coke & Pepsi, and other carbonated bottled drinks, but for obvious reasons it is far more environmentally friendly - for one thing you reuse the bottles so far  less plastic manufacturing takes place! In fact the Carbon footprint of Sodastream is as much as 80% better than Coke or Pepsi.

What about social action? We've all heard that Sodastream is an" Israeli settler company", so you could easily assume that its good for Israelis and bad for Palestinians...at least that's the knee jerk stupidity that Israel boycotts peddle - its what they hope the average person worldwide, not prejudiced but not well informed either, will think. What is disturbing is that organizations such as Oxfam don't seem able to see the difference between genuine campaigns for peace and dialogue in the MidEast and the Israel delegitimization BDS movement, based on a one sided hatred of Israel or worse, on antisemitism.  Sodastream may be based in a Jewish settlement in Judea aka The West Bank, but it employees hundreds of Palestinians who are paid above Israel's national average. These people work alongside Jewish Israelis in good conditions, have stable employment and have spoken out against the anti Sodastream publicity. BDS would have us believe that the mere presence of Jews in Judea is an obstacle to peace - they are advocating a population removal, an ethnic cleansing of Jews from their ancestral homeland, a place where Jews had lived uninterrupted for at least 2500 years until ethnically cleansed by Jordan  just 70 years ago. It is obscene to support the blatant racist policy of the Palestinian Authority "not one Jew" and yet the Boycott movement does exactly that, supported apparently by Oxfam and even the EU!

If we are serious about talking peace between Israel & Palestinians, then living & working alongside each other is surely the best way to create mutual respect. Allowing Palestinians to have a share in the success of Israel, creating jobs, boosting the Palestinian economy and having arabs and Israelis interact and see each other colleagues rather than enemies, is surely something Oxfam and the entire "peace movement" should be applauding. If a Swedish firm were to attempt to establish an environmentally friendly company employing hundreds of arabs and Jews to work together in WB, I'm sure Oxfam would support it.

If the BDS movement had its way, the already awful unemployment in Palestinian world would be far worse, because any effort to create positive working bonds and financial interdependence between Israel & Palestinians would not be allowed. The result of their policy is poverty and anger, and that anger is inflamed by the constant incitement of the Palestinian Authority directing it at the evil Zionists. On a larger scale the Palestinian refugees have been kept trapped, stateless, without a future by the entire arab world for 70 years. By any normal moral situation these people would be citizens of the states they, and their parents have been born in, as with any other refugee population, but they are trapped in refugee camps, and in poverty, all the time being told the evil Zionists who stole their country are to blame. 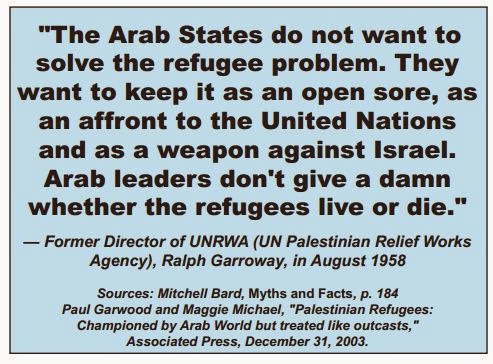 The world is complicit in this crime against humanity - humanitarian groups such as Oxfam supporting BDS are inf act supporting Palestinian poverty and incitement to violence, which is perpetuating their situation. On a regional scale the UN through the UNHRW has perpetuated Palestinian refugees farce for 3 generations. Simply look at its mission as compared to the UNHCR which has handled every single other refugee crisis since WW2 and you can see why the Palestinians are still refugees. This was obvious even in 1958 as the quote shows. The Palestinians are pawns of their Arab Brothers & the anti Israel movement, their future hope traded against Arab League policy & dominance of the UN, and the willingness & prejudice of "pro" Palestinians in the BDS movement to support the cause, even though while BDS irritates Israel, it destroys Palestinian lives.

Its time this farce - this crime against humanity -  ended and influential people and organizations give serious thought as to how to build Palestinian economic situation in West Bank through cooperation, and how to offer them citizenship and a future in the countries the refugees were born in. Perhaps they'll turn it down, out of Palestinian national pride, but I think the vast majority will grab it with both hands.

The Sodastream / Scarlett Johansson debacle, aside from no doubt giving Sodastream the best PR imaginable, to the chagrin of Coke & Pepsi, has finally shed a bright beam of light on the nasty side of the anti Israel movement - BDS. While that beam still shines lets tell the world that both Palestinians and Israelis deserve better than the hatred of the boycott / delegitimization movement. They deserve honest people, who care about peace not about making Israel suffer for being a Jewish state.