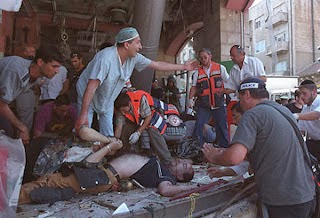 bombings until the much maligned security barrier and check points ended the suicide bombings. The context of the Second Intifada, which Arafat's widow has admitted was pre-planned  after the failure of the Camp David Summit, was used by Arafat to deflect the frustration of the Palestinian street from the reality that once again their own leader's intransigence had stolen a clear opportunity for them to build an independent future for themselves - it directed their anger and frustration at Israel. The truth is that pushing the Palestinian leaders toward a two state final agreement was a disaster waiting to happen - it never took into Arafat's inability to deliver an agreement to a Palestinian people, who had had decades of intense propaganda and incitement by those same leaders telling the Palestinians that they would accept all or nothing - eventually all of Israel would be Palestine - the end of Zionism - the end of Jews on Muslim soil. What Camp David offered was basically the partition plan that the Arab world had rejected in 1947. Worse, Arafat knew that the Palestinian refugees, living across the Arab World, could not be allowed to emigrate to this new Palestinian state, as it would be unable to cope with the massive influx.  These 'refugees' have been kept stateless for 70 years by the entire Arab world - with the UN complicit in this crime against humanity - as political pawns. He could never admit publicly that their mutli-generational refugee ordeal, unheard of in modern human history, would be for nothing, so he  pushed Israel over a "Law of Return" he himself knew he would never want enacted not would he honor. So Arafat sabotaged the talks, and started a terror war that set peace back until today, causing death and horror on the Israeli side & untold misery and even deeper anger (directed of course to the evil Zionists) on the Palestinian side.

Jump forward to 2013/14 and little has changed, in fact it is certainly far harder for today's Palestinian leadership to contemplate a final agreement with Israel than it was in Arafat / Clinton's time -   Palestinian Authority president Mahmoud Abbas is a far weaker figure than Arafat was; the Palestinians are split between two factions (Fatah in the WBank and  Hamas in Gaza) and the wider region is in turmoil, with regimes like Iraq, Syria, Egypt, Lebanon etc teetering on the brink while  Iran manipulates the Arab world through terrorists proxies like Hamas & Hezbollah. In 2014 the is no deeply respected King Abdulah of Jordan, or Hosni Mubarak at the height of his power in Egypt - there are few if any respected Arab leaders that can offer the support Abbas would need to make a Palestinian state and any agreement with Israel  work.

Despite this obvious fact, which all of us here in Israel, left & right, seem aware of, Sec. Kerry - obviously with Pres. Obama's full support - is pushing  the Palestinians very hard to come to an agreement that they simply cannot agree to at this time. For one thing Netanyahu is determined that if there is to be an agreement it will be the final one between Israel and the Palestinians, and is demanding Abbas recognize Israel as a Jewish state - which would once and for all would end Palestinian claims to the rest of Israel, while the Palestinians are being told by their leaders that any agreement is merely a tactic to get them closer to Tel Aviv being part of Palestine. The Arab League, who have used Palestinians as their pawns for 70 years, have told Abbas this is unacceptable.  Meanwhile despite the pressure, Abbas is now openly stating that there won't be an agreement, and the Pallywood machinery is firing up to  explain why failure will be Israel's fault. The truth is, Abbas cannot come to an agreement, the Palestinian people are not ready for an agreement - decades of incitement by the PA, being told they will one day own Tel Aviv which continues even as these talks go on, means the Palestinian street will see any agreement along "two states"  as a terrible failure, even a second Nakba. Abbas hasn't the authority to stand against that, not with Hamas waiting to exploit the anger to its own ends, in accordance with the needs of Hamas's Iranian backers. Kerry seems oblivious to this.

There is only one direction this can take the Palestinians - toward violence. Already we are seeing absurd news stories sweep the arab world, claiming thousands of Israelis have stormed the Dome of the Rock - if Ariel Sharon going there in 2002 could spark a Palestinian uprising, what could a story like this do ? The vilification of Israel will be stepped up, but behind it will be violence and more misery. This will be Obama & Kerry's legacy in  the region as much as the second intifada is Arafat's legacy. The sad truth is that the Arab propaganda machine,  combined with the Muslim states who have the UN emasculated, and the western Liberal's knee jerk "evil Israel" attitude  will find a way to ignore Obama & Kerry's foolishness at forcing this situation, and Abba's clear intransigence (for all the reasons above), and they will blame Israel yet again.  People will die because of this, lives will be wrecked on both sides and Kerry could well claim a Nobel prize for a peace effort that was doomed to fail from the start.
Posted by Adam The Israel Radio Guy: Israel's Anglo Broadcaster at 3:14 PM