Digging up Arafat Proves There is No Rest for The Wicked

I'm not sure if I want to blog on this topic or not - part of me is enjoying this master terrorist having his rotten bones dug up - why should he be allowed peace even in death, when he brought none to his own or the Jewish people in his life? Part of me is also laughing at the waste of energy, resources and time going into this conspiracy theory, but there's also the thought in my head of where this will lead: 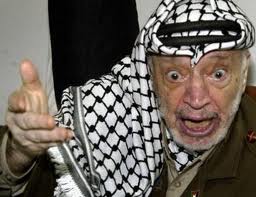 The story goes that Al Jazeera uncovered the 'hidden secret' of there being a radioactive source (Polonium) in Arafat's belongings when he died. That particular element can be traced to 2 known sources - Russia and Israel. The Palestinians, who always believed their decrepit old leader was murdered by the evil Zionists, leaped on this story & independent French and Swizz CSI boffins were flown in to dig up his maggot ridden remains.

The chances are that they will find nothing. For one thing, from what we know of his symptoms, they were not consistent with Polonium poisoning. If by some bizarre twist they do find what they are looking for, then they are left with a near impossible "whodunit" - Palestinians will obviously go wild with "Jews killed beloved leader Arafat" and he'll be elevated to martyr of Islam, which is similar to a catholic saint, but involves more killing innocents than saving them! The truth is, whoever would have planned his death, the actual person or people that did the deed would almost certainly have had to be in his inner circle - something I cannot imagine Fatah wanting to think about! Candidates for wanting Arafat out the picture range from Mossad to CIA; Abbas, Iran, Hamas, even his own wife and so many more.

If, as I suspect, in a few weeks the CSI body snatchers announce that their results are "inconclusive", it will make no difference - Palestinians will carry on believing Israel bumped him off, and nobody else will care. My suggestion to the Palestinians would be, if the results are inconclusive, don't give up  -dig him up again! In fact make shaking up his rotting carcass an annual event!  It's important that this yearly churning up of his grave be seen by the world as a fair and open process, so to make sure it is done with due diligence, the Palestinians should invite respected witnesses to the event. Ideal candidates for this role could be selected from the committee who awarded a Nobel prize to an unrepentant terrorist, that died with blood of thousands on his hands and the millions stolen from his own people in  his bank accounts.

In the highly unlikely and near impossible event that they are able to prove conclusively that Israel did in fact assassinate Arafat in this weird James Bond way, I would demand that all those involved are hunted down and exposed by the Israeli government, and awarded medals of honor by the UN.
Posted by Adam The Israel Radio Guy: Israel's Anglo Broadcaster at 9:35 AM