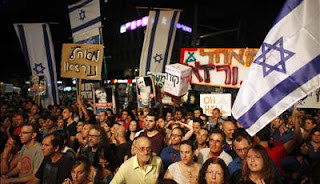 As a Zionist, and someone immensely proud of Israel's deeply engrained democracy, with all the inherent freedoms of a true democratic society, I was deeply moved by last Summer's social protest movement here in Israel. I felt that it was a movement of the people, representing the breadth of Israeli society, especially the Middle Classes. It represented me & my struggles with getting on the housing ladder; the insanely high price of basic food products, the untenable cost of childcare and much more. I marched through the center of Jerusalem with thousands of other young parents, middle aged families, religous and secular. There was never any sense that there would be violence, and in fact I saw people pick up trash as they marched! As Britain was engulfed by rioting thugs, Israel literally marched to the sound of democratic freedoms. The Israeli consumer discovered unknown muscles, the Israeli Middle class not only found it's voice, but learned to shout.


As this summer's protests begin, I can see that that our voices have been diverted to a new unpleasant agenda that has no bearing on my life or my hopes and aspirations as a middle class Israeli: Radicals such as Dafni Leef have stolen the leadership, the angry anarchists & bored students are the ones turning out and causing trouble and the needs of myself and my peers are being ignored. People like me don't want to be associated with raiding banks, blocking streets and fighting police. We won't attend the marches or listen to Leef and her cohorts use the protests as a launch pad for their own political careers. She wants the protests in Israel to mirror the ridiculous 'Occupy' movement in the US, achieving nothing but notoriety and violence. She isn't even close to the same page as I am. {photo: Dafni Leef arrested last week at protest} 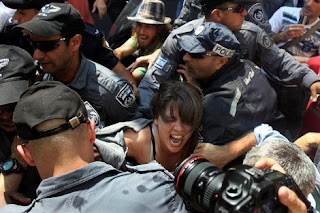 Last Summer the protests were about creating a society where hard work pays off; where wages are commensurate with the cost of living, where parents have the financial ability to work one job and have time for their kids. It was about dialogue & communication and was never about confrontation. If Israel's protest are simply to be 'Occupy Israel', I'm out and so are all my friends and I am really angry about it. We supported the protests last year because we needed to be heard and we still do. How dare Leef steal our voice just as we had learned to use it!
Posted by Adam The Israel Radio Guy: Israel's Anglo Broadcaster at 8:33 AM