New Islamists Governments and Their Iranian Friends Threaten the World

Ghandi once said "The spirit of democracy is not a mechanical thing to be adjusted by abolition of forms. It requires change of heart. "

The Arab spring, and the subsequent rush to elections across the Arab World is Christmas, and Ramadan all rolled into one for Islamic fundamentalists and their Iranian puppet masters

It took Britain hundreds of years ( and a civil war) to move from dictatorial kings ruling by the grace of G-d, to democracy. Even in enlightened Victorian Britian, when the monarch was a mere figurehead, democracy was marred by rotton boroughs, parliamentary seats being given as gifts by the gentry and mass disenfranchisement. The United States, standard bearer for democratic freedoms was denying black citizens the vote until just a few years ago. Why then does the US and Western states believe that democracy can be introduced in a period of weeks on populations that have never enjoyed any rights? It is just opening the door to abuse and manipulation.

The big bad dictator is gone..lets vote ! Its ridiculous! Democracy is a fundamental mind set, a societal understanding of inalienable rights. It is made up of checks and balances with societies, freedoms of press & of justice systems, and constitutions respected at near biblical levels. When you have chaos and confusion, people will grasp the idea of elections as a panacea to lead them to stability and hope, but elections are not in and of themselves democracy. This policy often leads to one man, one vote, one time. That isn't democracy, that's the hijacking of democracy by anti-democratic forces seeking power, and leads to another generation of dicators. Let us remember that Hitler came to power by manipulating democracy, and in the Arab world today there are forces as evil as the Nazi's doing exactly the same thing. Behind all the Islamist organizations you'll find Iran lurking. 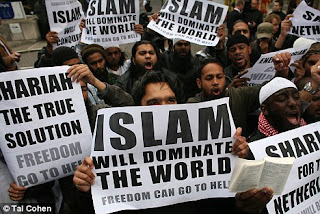 Egypt is a fine example: during Tahrir Square, the Islamists stayed in the background, but they had been working and preparing for years for the opportunity that was about to come their way, quietly receiving Iranian support and putting into place a strong structure from which to launch their campaign for power. Other opposition groups formed as the revolution progressed, but needed time to debate, formulate policy and infrastructure, and communicate ideas to the people. Time was the key, but instead Egypt leaped(or was encouraged by the US?) at the idea of elections and inevitably the only organized party grabbed power. President elect Morsi has tried to sell himself as a western educated moderate, but a moderate what? A moderate Islamic extremist! Thats like being a moderate Nazi! He believes in Dar Islam, where the entire Arab areas of the Middle East can only be under Muslim rule and any other people need to be removed or subjugated. Doesn't bode well for Israel does it??... and by the way, lets not forget that Assad of Syria is Western educated. It means nothing. He has already spoken of ties with Iran after 24 hours. Nobody should be surprised at the direction Egypt is about to take!

When these Islamist forces come to power whether though election or coup, they seek out political and socio economic allies, as any government would. Does anyone believe they will see the USA, whose values they despise, as their 'go to' partner? Is it credible that they'll want to seek peaceful coexistence with Jewish Israel, which stands as a beacon of true democracy, exposing their own systems of government for what they really are? The natural allies of the newly minted post Arab Spring Islamist governments is other like thinking countries and the king of those is Iran, already their friend and benefactor for many years. Iran has built relationships for years with Islamist parties and groups across the Middle East. The relationship is already in place, now it is time for Iran to reap the reward of it's hard work and planning.

Iran needs these new friendly governments urgently, because it faces the fall of Assad in Syria, which long been it's strategic power base in the Arab world (we often forget that Iran is not an Arab country). It was through Syria that Iran based and controlled Hezbollah and Hamas, which led to them gaining power in Lebanon and Gaza. It is therefore vital for Iran to seek new power bases, and what better than Islamist Egypt, Islamist Tunisia, Islamist Libya, and others. Iran has much to offer these like minded as they struggle to consolidate power. We are no longer facing Iranian footholds in the Arab world, but instead a pro-Iranian coalition which includes Egypt, the most powerful Arab state of all. One only has to look at the damage done to the UN and it's mission by the Islamic power block to know what it will mean to give Iran a far bigger voice there!

What can the West do?
What it should not do is appease. What it must not do is watch and wait. What it cannot do is ignore the scale of the Iranian threat as it once ignored the threat of Hitler's Germany. The West must engage these countries, support active opposition, nip anti democratic moves in the bud, It needs to ensure these countries depend on the West economically, but most of all The West, led by the US must deal with Iran. Remove Iran from the picture and the momentum behind the Islamists will be gone. Economic sanctions need to be draconian, support for Iranian opposition groups needs to be a priority, and the military 'option' needs to become a military build up on Iran's border. Saddam Hussein's Iraq was a huge threat to Iran, forcing it to focus it's military energy on their shared border. That threat is gone thanks to the West and Iran's ambitions have expanded. The fall of Iraq was like removing a nose ring from a bull!

The US and The Western world is in denial about the extreme threat Iran, and the new Islamist Arab world represent. They should remember what Israeli PM Netanyahu said on US TV after 9-11 " Today we are all Americans — in grief, as in defiance. ". It isn't just Bibi who sees that connection, so do Israel's enemies. Listen to their threats against Israel, because those threats are against the US, UK and the entire democratic world as well.
Ahmadinejad wasn't just looking at Israel when he said "Iran's warriors are ready and willing to wipe Israel off the map," , he was looking further west as well!
Posted by Adam The Israel Radio Guy: Israel's Anglo Broadcaster at 8:35 AM