As a religious Jew, it is not often that I write about Jesus, so what has sparked this evangelical fervor in a good Jewish boy? As it is approaching Christmas i thought this was the ideal time to right about the revisionist swill being sold to the world as Palestinian history:


There exists a very real “history war” whereby Jewish history is being erased and replaced with an invented Palestinian history by the well funded  Pallywood  propaganda machine. In recent years, they have invented  the  oft repeated lie that "Jesus was a Palestinian": 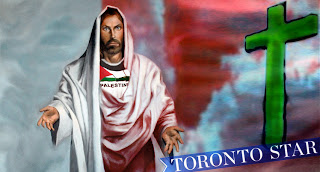 Lets use a little critical analysis of this nonsense: First there can be no question that Jesus was born and lived as a Jew (perhaps even a Rabbi). I doubt you'll find a single Christian scholar who would argue this point, which means that the Palestinian propagandists, who try so hard to eliminate the Jewish connection to the Holy Land, are essentially conceding that the original Palestinians were Jews! In fact the Pallywood lie machine ignores the fact that it was the Roman's who changed the name of Judea to Palestine, and they did this around 140 years AFTER Jesus died, which means he was a Judean  - an important point as that name is why we are called Jews to this day! 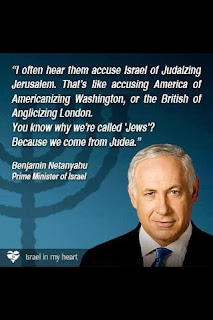 Let's look at 3 places closely associated with Jesus: Nazareth, Bethlehem and Jerusalem:
The first 2 are closely associated with the arab communities today: Nazareth where he grew up is today a major Israeli-Arab city although in Jesus's time it was a small Jewish community in the Galilee where his Jewish mother Mary had grown up (Mary is actually anglicized from the Jewish name Miriam - very popular among Jews then and now as it had been the name of Moses's sister but not a common  Muslim or Arab name);

Bethlehem is just 3 miles south of Jerusalem and is where Jesus was born according to the Christian bible. It is a city which hosted a strong and important Jewish community for many centuries: It was the biblical Ephrata (called Bethlehem Ephrata in the book of Micha) where Jacob buried his beloved wife Rachel, it was the home of Jesse, father of David as well as the prophet Samuel. The Jews were ethnically cleansed from Bethlehem after the Bar Kochba revolution. Incidentally, Bethlehem was for many centuries a majority Christian Arab city until a Muslim Palestinian influx during mandate times, and later the Palestinian Authority has made life there very uncomfortable for Christians who are leaving in large numbers.

Jerusalem, the 3rd city associated with Jesus, was the home of The Jewish Temple which stood many centuries before Islam was created until it was destroyed by the Romans after Jesus's death, on the spot where today stands the Al Aqsa Mosque. The entire city was devoted to serving the Temple, and the ancient parts of this city still show many signs from that period, including the Western Wall, the only remaining structure from the Temple itself, and the Holiest Jewish site in the world.

We don't need to be biblical scholars to see from this that the land Jesus walked through was a Jewish land, even with its Roman overlords at that time, and the looming exile of the Jews that would occur a few decades later. If Jesus was a Palestinian, then the true Palestinians & real the indigenous people of Israel - were and are the Jewish people.

The Palestinians crudely and blatantly invent a Palestinian history that distorts and insults Christian & Jewish belief,  as they are basically saying  our bible lies - this would  cause riots if it was said about the Koran!  What this kind of revisionist propaganda actually reveals, is the Palestinians sparsity of connection with this land as opposed to the deep and obvious 3000 year Jewish history in Israel.
Posted by Adam The Israel Radio Guy: Israel's Anglo Broadcaster at 3:24 PM