Lets Cut The Israel Cr@p - There are Dead Children on Our Beaches ! 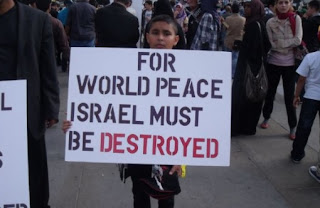 If you take a look at the language Israel's many detractors are using even on this very day, you'll come across phrases such as "IsraHell", "Genocide", comparisons with ISIS, Nazi Germany etc. This prejudice has never been funny nor has it been about helping Palestinians, but in light of the true slaughter of the MidEast and its devastating results on the world, this language of blind hatred against Israel has become obscene.

There is an international boycott movement, which is  blatantly singling out Israelis and even non Israeli Jews, trying to make us  the pariahs of the world, blaming us  for all the ills of humanity  - Companies such as Sodastream are attacked, even though they are an inclusive company which employs Palestinians at all levels and pays them  well;
Israeli politicians are threatened with arrest when they travel overseas; Jewish students have to deal with horrible campaigns against Israel on their campuses and media finds ways to twist the most innocent or positive thing Israel does, into something they malign as racist or evil: 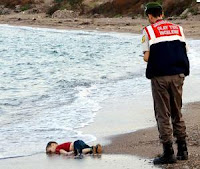 Its time this bigoted disgrace to  our intelligence came to an end! For G-d's sake... there are bodies of children washing up on Mediterranean beaches!! There at least two million refugees on the edge of Europe, fleeing from Israel's neighbors where a genuine hell exists, where true genocide - a real carnal house -  is taking place right now, and all the lies said about Israel are actually happening, only far worse than even Israel is accused of - But there no boycott campaigns, no student activities - nobody is pouring blood on themselves in protest on the streets of Hollywood - the israel haters are carrying on - they don't seem to care.

Many times more people are dead from the Syria / Iraq / ISIS horror than in the entire history of the Israel / Arab situation, and in just the past few weeks 10 times more Arabs have been displaced than occurred during Israel's war of independence.

I have nothing but contempt for anyone that calls Israel a terror state, israhell, etc but anyone doing it
today? Such a person is guided by hatred and bigotry, because logic dictates that anyone with an iota of humanity would not be able to look at the only democracy in the region, the only country where the 20% minority citizens have democratic rights and a place people flee toward not away from, and use such descriptions when we see what the real thing looks like. 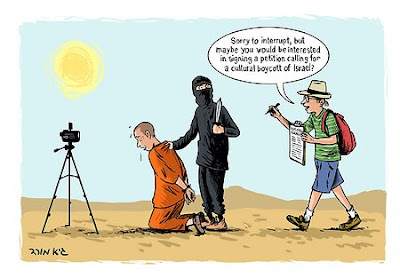 Israel is not perfect and the Palestinian's have  legitimate issues that answers need to be found for, and genuine discussion needs to be taking place, but those that focus violent hate on Israel at this time are like a doctor treating a person's in-going toenail, while the patient bleeds out from a gun shot wound - it makes no sense and therefore it isn't guided by sense, but hatred.

Lets solve the region's real & horrific problems and maybe the answer for the Palestinians will resolve itself as part of that regional change - one thing I guarantee, anyone spouting of about Israel right now, doesn't give a damn about solutions, Palestinians or hope - they just hate Israel and we all know why.