The reporting of the conflict between Israel and Hamas has been so poor and so  manipulated by the jihadists  that it has prolonged the conflict, causing many further deaths and may directly lead to  a new round of violence in a  few years. let me explain:

When I was in grammar school, I was lucky to have a superb history teacher - Mr.King - and one of his principles of teaching history, which stayed with me to this day, was that although we studied wars, we never studied battles. Why? because he told us that what matters most is causes & resolutions of wars: The details of all those famous WW1 battles: The Somme, The Bulge, etc matter only to survivors and military historians, but for geopolitical history what is important is how the world got dragged into a 4 year world war over an assassination and how it ended based on President Woodrow Wilson's  plan, which was ignored at Versailles, sowing the seeds of bitterness and anger in Germany that would lead to Hitler's rise to power. Critical analysis - that's how lessons are learned in history and it is exactly the same for good journalism. 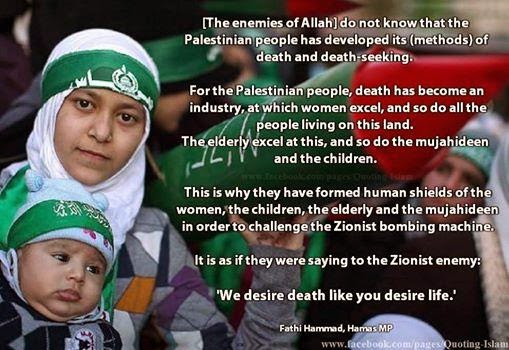 Yes - an exploding house in Gaza makes great footage, people's emotions are tugged by the site of a dead
child, but what is the context? If the journalist doesn't explain and his editor doesn't push him to talk beyond the immediate moment, then nothing is learned. So we never learn the house was booby trapped, or that children were deliberately placed next to weapons as human shields. Worse, it allows forces in conflict to horribly manipulate world opinion and what we are seeing right now out of Gaza is the very worst example of poor "in the moment" journalism that I have witnessed, with the focus of context so narrow, and so controlled by Hamas, that world opinion has been manipulated to sympathize with a jihadi terror movement that makes mass use of human shields, has so infiltrated UNRWA that it is able to hide rockets in schools without fear of reprisal, which stole billions of dollars of aid money from Gazan citizens to build a huge weapon stockpile, killed hundreds of Gazan kids to dig its terror tunnels, and started not one, but three wars with Israel, firing exclusively on civilian populations, from civilian areas. How has Hamas managed to convince the world that it is  - as House leader Sen. Pelosi described -  it "a humanitarian organization"? By the epic failure of much of the media to do its job, ask the right questions, and join the dots!

Let me give an example - Israel it seems, has managed to hit refugee centers on an alarming once a day
schedule, with a clear civilian death toll. This is strange because it is highly unlikely that Israel is deliberately targeting these places, and it is generally aware where they are situated. There is nothing positive in these actions for Israel - the only success Hamas has had in all this violence is world opinion - so why are these places being hit? Well one answer is that some of these strikes have been Hamas rockets misfiring - although initial reporting and condemnation focused on Israel, a few days later the truth came out. In other cases there is little doubt that Israel hit the refugee centers - but whats missing is a context the journalists on the ground are totally aware of, but unable to report: Hamas fire on Israeli or Israeli forces from positions in or near these centers - this is deliberate use of human shields designed to cause civilian deaths, as weapons against Israel. Hamas has clearly failed militarily to cause significant damage to Israel or to slow the IDF in any way, but they have succeeded, as I say above, in hurting Israel through the media. Hamas is clearly, crudely and obviously drawing fire to places where civilians are located. It is Hamas's long standing, well documented, policy of using human shields and it is not being reported.

Here is where the media is culpable: it has allowed Hamas this success without which they would have very little reason to continue fighting. It is no secret that journalists within Gaza are unable to freely report what they are witnessing, due to threats from Hamas. This is why we see plenty of photos of dead or injured children and mourning mothers as well as general destruction, but absolutely no images of Hamas fighters, rocket fire, and no suggestion of where the fire is coming from. I don't blame the 'in-situ' journalists for this failure - they are scared, with good reason - but I do blame the editors & news directors back home, knowing the threat to their people, for not telling their readers and audiences that journalists are unable to
report what they are seeing, and for not reporting the truth from their studios outside Gaza. If this is because they fear for their team's safety, then why the hell are they there in the first place? What this stream of propaganda - which essentially is what a manipulated media source becomes - causes is prolonged fighting, and suffering in Gaza. It puts pressure on Israel to stop while Hamas still hold onto power - that will inevitably lead to Hamas again oppressing the people of Gaza re-arming, stealing resources from civilians for their next campaign, and in 1-2 years, we will witness the destruction of Gaza once more.

Make no mistake - those years of oppression and horror in Gaza and the next round of violence, will partly be the fault of the failed media reporting of this round.
Posted by Adam The Israel Radio Guy: Israel's Anglo Broadcaster at 9:44 AM