The Palestinians, badly treated by the Arab world, must turn to Israel to build a lasting future

The Palestinians have no friends in the Arab world - they are to some states pawns, to others parasites and to yet others, the "untouchables" of the arab world - Across the Middle East the so called 'refugees' are denied passports & citizenship by the countries they, their fathers  and grandfathers were born in. The aim, aside from clear racism and lack of basic humanity, seems to remain the same since 1948 - the politicization of the Palestinians:

"The Arab states do not want to solve the refugee problem. They want to keep it an open sore, as an affront to the UN and as a weapon against Israel. Arab leaders don't give a damn whether the refugees live or die." Ralph Galloway, former Director of UNRWA, August 1958

Arafat himself said "We refuse to talk about the resettlement of refugees [where they are currently living] because this is a crime….It is the Palestinians' right to return to their homeland." Yasser Arafat, Al-Quds (Palestinian newspaper) September 11, 1999

Arab states treatment of the Palestinians born in these countries - their countries -  is beyond awful - it is deeply racist - in Lebanon they can not own property or study any course of higher education or professional qualification;   Saudi Arabia, during their labor shortage of the 1970s and 80s , chose to employ foreign workers rather than resident unemployed Palestinians.
In fact, it often seems that the only time Arab states even pay lip service to Palestinian concerns is when they are connected to Israel. 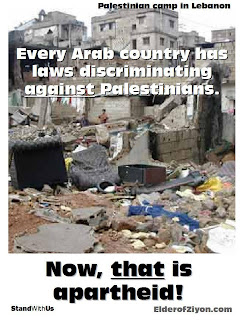 Meanwhile, the Palestinians themselves, kept poverty bound and stateless in their 'refugee camps' (essentially a policy of Nazi era style ghetto-ization) are taught that all their woes are because of "Zionists" who caused this Nakba (calamity). They are taught to hate from kindergarten -" Zionism caused your problems...Zionism is evil...one day the Zionist state will fall" say their Arab "brothers" and the Palestinians know no different. They hate the Zionists, believing with great faith, the Pallywood lies of apartheid, genocide and child murder.They see Israel as the perpetrator of the horrors in truth are occurring daily in virtually every other state in the Middle East APART from Israel! They see no irony in Israel being the only country in the Middle East where all its citizens, including Arabs, have the rights 330,000,000 other arabs can only dream of; They probably never hear that israel is the safe haven for minorities persecuted in Palestinian society (gays, Druze, Bahai, christians etc) - they only know that their Arab brothers say everything bad is Israel's fault - look at Twitter: Syria is a zionist plot, riots against Morsi in Egypt - Israel caused that; Hamas persecution & oppression - if Israel wasnt there it wouldnt happen; 9/11 - Mossad - even the Japanese tsunami is widely believed in Arab world to have been caused by Zionism.

The truth however is that for them to have any future, it can only be with Israel. The Arab states hold no solutions for the people against whom they have perpetrated a racist crime against humanity for 65 years, and if & when a Palestinian state is born, they'll offer little more than lip service. More than likely they will expel their Palestinian 'refugees' forcing millions of people to emigrate to the tiny Palestinian state which will be unable to receive them.

A future Palestinian state will need port access, it will need water , gas and oil, food even. That isn't going to come from Lebanon or Syria, and probably not too much from Jordan - only Israel can provide the trade agreements that Palestine will need - without Israel they will be doomed - indeed as I have already said, if the Arab states unload their refugees on this state, it will be doomed anyway and Israel will find itself with a worse situation on its hands than it currently faces.

Further more, the Palestinian position in the Arab world became weaker as Israel recently became a gas producer, and shortly will be the 3rd largest gas and oil exporter in the Middle East. The oil producing Arab states are aware of this and are already signalling a shift in their entrenched positions toward Israel, with some of their smaller allies and proxies trading openly with the Zionist entity. Iran (not an Arab country) is making a power-play for political control and influence within the Arab world, and has chosen Israel as the method of gaining that power - this too makes it worthwhile for those Arab states ranged against Iran, to change their position on Israel. All this does not bode well for the Palestinians, whose policy - sometimes stated, sometimes not - has always been "all or nothing" - they have avoided negotiations on final settlement agreements even when they have had this in their hands, because  they have sold their people the lie that there really is only a one state solution - Palestine - after all, how can they tell the people they are making a deal with the source of all evil? So Arafat started an intifada rather than sign an agreement, and Abbas twists and turns, offering any reason and objection he can find why he can't negotiate.

There is a glimmer of hope in all this for both Israel & the Palestinians - the possibility, rarely mentioned, of a regional agreement. As Arab states start to need Israel more than they need it gone, they may become more able to pressure the Palestinians to the table, more willing to offer citizenship to 2nd and 3rd generation 'refugees' born in their countries. This offers Israel the security guarantees that it seeks, and opens for the Palestinian state the opportunity for trade and goods to travel through their small country. Its a small window of hope, and if this doesn't come to be, I see no future for the Palestinian people, who history will probably judge as a people who, in the words of Israeli elder statesman, the late Abba Eban  "never missed an opportunity to miss an opportunity"
Posted by Adam The Israel Radio Guy: Israel's Anglo Broadcaster at 5:23 PM