What Real Zionism is All About

Israel's cruder enemies like to define Zionism as being about  controlling the media, controlling banks, colonizing vast areas of Arabia and so on. This is a blatant distortion, indeed blatant antisemitism, that shares little with actual Zionism. Israel's more intellectual enemies often seem to confuse the work and policies of the democratically elected governments of the State of Israel with Zionism in general, which is unfair as the two are by and large unrelated - this explains how  a passionate Zionist can be for or against  settlement in Judea and Samaria, and other policies of Israel. This should not be difficult to understand: There are many Republican Americans, who deeply love their country and the principles for which it stands, whilst been strongly antithetical to the current incumbent of the White House, Democrat Barak Obama.

What Zionism always was, and still is truly about is the in-gathering of the Jewish people in our ancient homeland of Israel. In today's world its also about connecting the Jewish diaspora with Israel, so that for Jews who don't live in Israel, they feel a deep, intimate and lasting connection with this country. While Zionists, as part of their passion for Israel, may argue current affairs connected to Israel, as part of their Zionism, many others will have little interest in these issues, focusing instead on social welfare, or education. 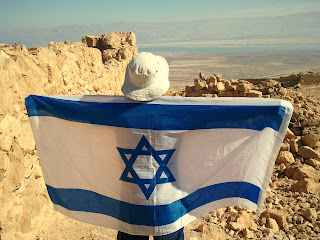 As I've written previously, I am a passionate Zionist, someone who believes strongly in the idea of a Jewish Israel  as being the only option for long term Jewish survival and growth. My Zionism has and does express itself in various ways - this blog is an example of the political side of my Zionism, but in truth I have always been at heart a Jewish educator, wanting to encourage young Jewish people to learn our ancient language, and walk in the footsteps of our ancestors. The other  most obvious expression of my personal Zionism is my decision to "make aliyah" - move to Israel - and become an Israeli myself.

My work in Israel has always been involved in furthering Zionism in some way - I presented a daily radio show aimed at supporting English speakers in Israel and to encourage Jews overseas to connect with the community here; I worked for The Jewish Agency for Israel, helping raise funds for various Jewish communal projects, in Israel and overseas; and more recently I took up  my current post as social media manager for one of the largest Birthright organizers in Israel. Taglit-Birthright Israel is as pure an expression of Zionism as exists: A partnership between the Jewish Agency,  the State of Israel and Jewish philanthropists, Birthright brings 10,000s of young Jewish adults who have never been to Israel on an organised program, to Israel on a 10 day free trip. Its an astonishing gift, which is succeeding in ensuring an entire generation of Jews from American and around the world will come to this country, travel it, hang out with Israelis of their own age, eat its food and be surrounded by its music, language and culture. Its aims are simply to make that connection - to understand the country beyond the CNN reports, their temple's history lessons and the Pallywood propaganda.

This summer once again 40,000+ young Jews will travel the length & breadth of Israel, recognizing the achievement of Zionism in taming what was a barren, unproductive wilderness, and the success of the Israeli people in building a vibrant open democracy in a region where the rights ordinary Israelis enjoy, where Jew or Arab, are rarities. Israel's population is not even 8,000,000, surrounded by 350,000,000 arabs, yet it leads the Middle East in hi tech development, medical research, entrepreneurship, university graduation,  patent application and even basic literacy. Walk the land is all Birthright is saying - see what Jews have built here, and you will forever be connected to this place and the people who built it.

Thats what Zionism is about - having young Jews stand in Israel, connect to its people and understand their place in the Jewish people.