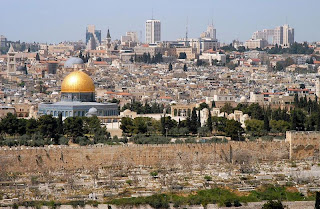 Only Israel has to justify its choice of capital city and when you consider that Jerusalem has always been associated with the Jewish people, it is remarkable that this debate is being had in 2012. The BBC's recent unique difficulty on its Olympic info site, with Israel's capital exposed not only the BBC's bias and double standards when it comes to The Jewish State, but it also served to bring the debate of Israel's capital back to the public eye.

At the core of the Palestinians argument is their claim that Jerusalem has always been an Arab city, and that Jews are inventing a new history both modern and ancient to lay claim to their capital. Essentially they are saying the city is simply a big 'settlement' built on their land. Palestinian President Abbas's recent irrational statement that there was never a Jewish temple in Jerusalem should be seen in the light of his holocaust denial and dismissed for the nonsense that it is, showing the Palestinian desperation to eliminate the strong Jewish ties historically, physically and emotionally.

The Palestinians seem to have a stronger argument when they assert that as the Jews only started to return to Palestine in serious numbers in the first half of the 20th century, it sounds logical, that Jerusalem would have been an Arab city & that the Zionists created 'facts on the ground'? Well, that maybe an easy argument to sell if you don't look to deeply into it, because the actual facts do not support the assertion:

Recently, Jerusalem Municipality restored a windmill, built in the mid 1800s overlooking the old city wall, which back then contained all of Jerusalem (today only a tiny percentage of Jerusalem's population live inside the Old City). It got me thinking that if the windmill was one of the first buildings of New Jerusalem, then how many people actually lived there and what were there backgrounds? The statistics are revealing:

The Arabs themselves did not place that much importance on Jerusalem when it was in their hands: When Suleiman became ruler in 715 ce, he founded the town of Ramla as his regional capital and not Jerusalem which would remain neglected and squalid under Ottoman rule as well. More recently when King Hussein of Jordan captured the West Bank and East Jerusalem in 1948, he too did not make Jerusalem his capital, or invest in transport links to the city, or any major improvements in Jerusalem. He kept Amman as his capital and even tried to build a mosque there that would compete in importance with the Al-Aqsa Mosque in Jerusalem.

Palestinians today accuse Israel of stealing land and ethnic cleansing in order to once again create 'facts on the ground', but do these accusations stack up any better than their Presidents historical myths? They claim, for example, that the Southern Jerusalem neighborhood of Gilo is a 'settlement' built on Palestinian land, but the vacant land in the Gilo area had been legally purchased by a group of Jewish lawyers, including Dov Yosef, before World War II. Jordan expropriated it from them after the 1948 War and after Israel captured the Territories, they asserted their rights, backed up with legal documents processed under the British Mandate, and the land was returned to them. Similar charges are made about the Jewish settlements in the Bethlehem area, also a few minutes south of the capital: Gush Etzion, Kfar Etzion and other villages in the Jerusalem-Bethlehem corridor had fallen to Arab forces in May 1948 and those captured were massacred. Sons and daughters of Jews who lived there until 1948 were the first to return after the 1967 War to reclaim their families' homes.

The media makes much noise about Israel destroying Arab homes in east Jerusalem, which certainly has the ring of ethnic cleansing, but again, these dramatic statements hide a few vital things: context and facts! A Palestinian Legislative Council member who represents Jerusalem boasted in 2001 that Palestinians had built 6,000 homes without permit between 1997 and 2001 and that less than 198 were demolished by the authorities. Without permit means without regard to planning rules, green areas, sewerage, electricity and water. Without permit means that there is no oversight which raises serious health and safety concerns and it also means that as the city does not know the building exists, it will not receive property taxes, with which it pays for the municipal services the residents of the illegal building will receive. One of the more serious issues has been illegal builders putting structures on property they do not own or else forge ownership papers. The real Arab owners of these properties then register complaints with the municipal authorities, but of course, when the properties are destroyed, the propaganda spin is 'ethnic cleansing'. Using simple constructive criticism, what city can have entire populations ignoring planning regulations? The idea is ludicrous. In the UK, if you put up as much as loft extension without planning permission, it will be removed, but rarely do the local residents accuse the UK government of ethnic cleansing!

Israel is a sovereign state, it long ago chose it's capital, and can anyone in truth imagine the Jewish state could place its capital anywhere else? Jerusalem has long been a Jewish city, and under Israeli rule the city is thriving for the first time since the Roman destruction. The Arab residents have patently not been forced from their homes and nobody is suggesting that they should be. The opportunities that this city offers all its residents are huge and it is in the Palestinians hands to take advantage of these or to do what they seem to do throughout the past 100 years, and choose to ignore a chance to partner with Jews to build a future for themselves.

For the rest of the world, its time to accept Israel's choice of capital and stop buying into the propaganda – in the world of google there's no excuse to not look more deeply into their shallow claims and as a rule of thumb, when a holocaust denier tells you something, you ought to take it with a large pinch of salt!

Posted by Adam The Israel Radio Guy: Israel's Anglo Broadcaster at 11:22 AM