Who's To Blame For the New Iraq Crsis?

Yesterday former British Prime Minister Tony Blair sought to distance himself from Iraq's current decent into chaos by placing the blame not on himself & Pres. Bush's decision to invade Iraq & remove Saddam, but instead he placed the blame firmly at President Obama's feet, over his inaction in Syria and his removing US forces from Iraq before the Iraqi army was ready to shoulder the responsibility ( as they showed when at the first sign of trouble, they dropped their weapons and ran). Blair has subsequently received a lot of flack & derision for his comments, but does he have a point?

Where he is correct is that Syria's civil war is superficially where this violence has spread from and  Obama & UN)'s failure to act in Syria has led to what is occurring in Iraq, and could spread further (Lebanon even Jordan). Obama is seen by Arabs and indeed most of the world, with a great deal of justification, as incompetent  in foreign policy & indecisive when it comes to using the massive military force the US can wield. His "Red Line" in Syria was a blatant example of this, preferring to  be railroaded by Putin & Assad rather than take the action he had loudly threatened months before. As any parent knows - you don't issue threats if you don't or can't follow through.  Obama's  incompetence  has created a power vacuum around the world that Putin has certainly exploited in Crimea and so have extremist elements in Syria & that has most certainly spilled over into Iraq.

Tangentially Obama's response to Iraq's plea for help is to basically tell them deal with it themselves, when it is clear they are overwhelmed and cannot. One way that we will all pay for Obama's failure will be by rising oil and gas prices worldwide which will impact on economies only now emerging form recession, including in the US.

Tony Blair is also fundamentally wrong, because he ignores the role of Iran in all of this as does Obama (although Blair is far more astute than Obama) - Iran & Iraq were implacable enemies prior to Saddam's fall. 100,000s had died from the two states during their protracted civil war and they faced each other across their border warily, with a great deal of Iran's military resources focused on that front. Bush & Blair's actions in 2003 removed that threat to Iran - it was like taking the nose ring out of a raging bull. Since then, unfettered from fears of a powerful enemy, they have sough to take control of the Arab world - drastically increasing funding and support to groups such as Hamas & Hezbollah, and deliberately destabilizing

Lebanon, Syria & now Iraq in the process. The scapegoating of Israel is Iran's  rallying call to the Arab street (traditionally wary of the non Arab Persians). Iran are behind the ongoing civil war in Syria as much as Assad & they are quite blatantly manipulating the strife in Iraq. Bush & Blair's advisers should have foreseen this consequence.

However, Bush & Blair have not been world leaders for several years - only a few months ago Obama again displayed his weakness by letting Iran off the hook over its nuclear ambitions. When you consider that Iran is funding many of the Islamist terror groups slaughtering people around the world, then not taking decisive action over their desire for nuclear weapons borders on imbecilic - certainly blatant incompetence. The world placed Iran under heavy sanctions that eventually brought them to the negotiating table - the US & UN held all the cards. Iran was brought to their knees and basically crawled to those negotiations - so how is that a few weeks later that same Iran walked away ... no skipped joyously away, with at best flimsy restrictions which do little to protect Israel or the West? Yes - the West & US are threatened too - Iran has ICBM long range missiles, which it does not need to reach Israel or any other Mid East target - who are these weapons intended for? 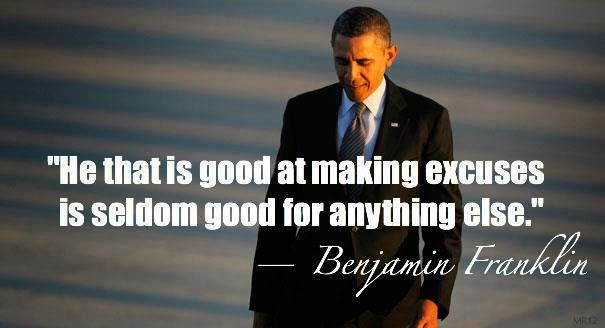 At any point, Obama could utilize the power that comes with his office & slow or stop the destabilization & accompanying misery Iran is causing to millions of people. He could remove the threat this rogue nation of war represents. Iran is the fuel feeding the Mid East fires - remove that fuel & the fires will die down. However Obama's US continues to fail to bring its strength to bear on Iran, Putin or in Syria. His failures will cause many more deaths, over many more years,  than Bush's or Blair's ever did.
Posted by Adam The Israel Radio Guy: Israel's Anglo Broadcaster at 1:22 PM