For over two years I have repeatedly blogged, tweeted and published articles about the plight of the so called 'Palestinian refugees' - I have said over and over that they have been used since 1948 as pawns by the Arab world - as a weapon against Israel. It should be obvious to all that despite the PLO's often repeated mantra of "law of return" for these refugees, no Palestinian state would have the resources to allow these 5,000,000 stateless pawns to live in Palestine. This has been a reason that the Palestinians for many years have been avoiding negotiations. However Obama & Kerry have dragged the PLO to the table, supported by Israel's impossible to ignore gesture of releasing Palestinian terrorist prisoners.  So now it is time to admit what the PLO has always known -   if these talks are successful the Palestinian refugees will not have a share in the new state:

Palestinian ambassador to Lebanon Abdullah Abdullah admitted as much in a media interview in 2011 about Palestine’s  bid for U.N. statehood at that time. This high ranking Palestinian official  unequivocally stated that Palestinian refugees would not become citizens of any Palestinian state, an issue that has been much discussed. Abdullah said that the new Palestinian state would “absolutely not” be issuing Palestinian passports to refugees.
“They are Palestinians, that’s their identity,” he said. “But … they are not automatically citizens.”

A brief overview of the history of these refugees, shows how they have been treated treated like no other refugees in modern history creating the human tragedy that exists today - In brief  if you were made a refugee from Pakistan, Rwanda, or an Icelandic act of nature, you would be helped by UNHRC, who's website states their mission:
"The agency is mandated to lead and co-ordinate international action to protect refugees and resolve refugee problems worldwide. UNHRC strives to ensure that everyone can exercise the right to seek asylum and find safe refuge in another State, with the option to return home voluntarily, integrate locally or to resettle in a third country."
If however you have Palestinian ancestors, the UNHRC cannot help you, because apparently Palestinian refugees are under the mandate of UNRWA - which exists not to help them find safe haven or start new lives but to maintain them as permanent refugees as their own website admits:
"UNRWA provides assistance, protection and advocacy for some 5 million registered Palestine refugees in Jordan, Lebanon, Syria and the occupied Palestinian territory, pending a solution to their plight.

What this difference  has meant is that 3-4 generations of Palestinians have been kept stateless across the arab world - often suffering from harsh racist local laws which deny them property, education and employment and most certainly citizenship. The reason has always been known, as was stated clearly in 1958 by the then head of UNRWA: 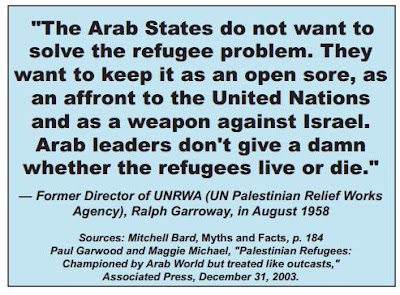 This is a crime against humanity, which has seen the UN complicit in its role as enabler. The so called  Pro-Palestinians also have a lot to answer for - a genuine "Pro-Palestinian" would surely be someone who not only puts pressure on Israel but would also look for resolution to the plight of Palestinian refugees in the countries where they, their parents and their grandparents were born.  However, despite the racist anti-Palestinian legislation which exists in every arab country, the so called Pro-Palestinians never discuss the issue. As I've said before, they are not pro anyone, merely anti-Israel...sorry 'Zionism'.... as they can't bring themselves to use the name of the only democracy in the Middle East. 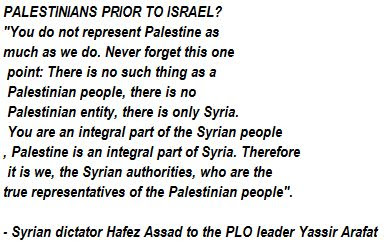 Imagine you are one of these "Palestinian Refugees" - you have never been to Palestine / Israel; you, your parents and grandparents have been born in Lebanon , Syria, Egypt etc - prior to 1948 your family may well have seen themselves as Southern Syrian rather than any other arab identity - in 1948 the Arab League, & local Palestinian arab leaders including the infamous Mufti of Jerusalem - who spent WW2 as a guest of Hitler - called for the Arabs of Palestine to leave while the arab armies would defeat Israel once and for all and so your family found themselves refugees in a neighboring arab state - all these generations later you have been born a refugee, not allowed to take part in the citizenship of the country of your birth  perhaps banned from an education or job, not allowed to put down roots or in any way improve your life - you have been told to blame the Zionists - "they did this to you! ...One day the Zionists will be pushed into the sea, and you'll go home...". Home, they are told, is not the country they want to live in, but the one they are TOLD they want to live in ! Its like Zionism's evil twin! The Arab world has created its own microcosm of the Jewish experience to build a politicized angry Palestinian identity by persecuting them in the same way Jews were persecuted for centuries - laws ensuring they live in ghettos (refugee camps)   lacking opportunity to buy property or some states even have professional training or qualifications... all this whilst punctuated by occasional pogroms and all along the UN has watched and supported this crime.


Here we are in 2013 and the PLO is sitting at the table in Washington, talking with Israel, but as Palestinian ambassador  Abdullah Abdullah explained - regardless of the outcome, there will be no place for the refugees in the new Palestine - how could there be? They number 5,000,000 poverty stricken people - Palestine at best will be a small, poor state and will need many years to become economically viable - so after all these years, all the raucous bleating of the anti Israeli / BDS crowd, these Palestinians will have gained nothing from their 65 years as pawns - being to the Arab world what the Jews were to Europe prior to Hitler. Will anyone answer to this crime against humanity in the Hague? Will a commission of inquiry  ever be established to examine the UN's role in supporting one of the greatest human rights aberrations since WW2? Will the UN finally shut down the UNRWA and place the Palestinians under the UNHRC like every other refugee in the world since the founding of the UN? The UNHRC would of course seek to make the Palestinian refugees citizens of the countries that they have been born in. Will Saudi Arabia, Lebanon, Egypt etc finally recognize these people for what they are - children of their countries of birth - and grant them the rights of 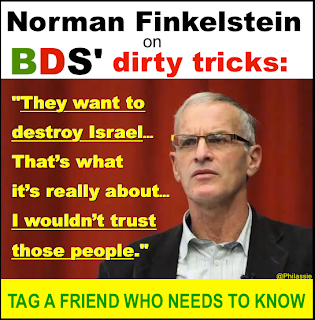 citizenship? if not - what will happen to them? Will they rise against the injustice the Arab world & UN has done to them - a true Palestinian Spring? or will they continue a campaign of terror, possibly aimed at Palestine as much as Israel?  Will Israel's BDS haters - motivated as many suspect by a virulent modern variety of antisemitism rather than any true humanitarian feelings - maintain their campaign against evil Zionism, moving from settlements to the Palestinian refugee cause as their hypocritical new  reason to boycott Israel - this would ensure that for another generation, the refugees will continue to suffer the racism of the past 65 years. of course these haters of the Jewish state will have the fullest support of Hamas & other Islamist Palestinian groups, which will no doubt gain succor from these campaigns and keep alive the false hope of return for the refugees.

While it must always be better in a conflict  if parties are talking, I am doubtful that anything useful can come from the current negotiations - especially in the current climate in the Arab & wider Islamic world. However, I will say for certain that if the Arab states are not part of a solution for the refugees, regardless of the outcome of the talks between Israel & the PLO, their suffering will continue. if it does, no amount of agreements on the ground in Israel will have the dramatic impact on the Middle East that President Obama is hoping for - his Sec. of State  John Kerry urgently needs to bring the non Iranian aligned states in the region to the table as well.