Every day I read tweets accusing Israel of racism, apartheid, even fascism. Throw in genocide, child murders, ethnic cleansing, and building concentration camps and it just about sums up the level of vitriol that spews from the frothy mouths of Israels enemies! What is particularly scary is that there seems to be a growing mainstream acceptance of these hate filled arguments, despite there being such crude lies. 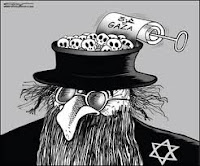 What should be obvious to all is that behind these very arguments is a religious / nationalist philosophy that really does all these horrific things it accuses Israel of! Just scan the news headlines for examples of genocide, ethnic cleansing and other horrific human rights abuses, and you will no doubt find Israel's dedicated enemies in the Arab & Islamic world: Syria, Iran, Lebanon to name a few and of course terror groups like Hezbolah, Al Qaeda and Hamas.

I am sure that if I were to take a poll with questions such as those below, I'd be unlikely to hear the word "zionism":
1. Who are the 2012 equivalent of Nazi's?
2. Why are there scanners in airports?
3. what is greatest threat to world peace?

If you look through the past 5-10 years of genocide reports, and horrific human rights abuses on a Nazi scale, you'll find that it is almost exclusively happening within the Islamic world, whether in Middle East, Africa or Asia.

There is no genocide, no ethnic cleansing in Israel, and accusations of such extremes merely take the 'playing field' away from the real issues that exist. In fact there is no country on earth, and no army like Israel that is under such close scrutiny by media and HR groups. The Islamic world of 2012 is a clear and present danger to the values of Western Society. They threaten the liberal ideas that our states eschew; they threaten the moral priniples that our democracies and judicial freedoms rely on and they threaten to roll back the equality of men and women by 100 years and indeed, they threaten our very lives.

Israel is not the cause of the problem, merely the focus of it. Israel sits on the meeting point of three continents: Africa, Europe & Asia and of three great faiths of Judaism, Islam & Christianity, and it represents a bastion of liberal freedom and democracy in a neighborhood that fears those ideas more than hell itself. I'm not glossing over the real problems that Israel & The Palestinians face, but the 'anti Zionists' don't care about that, in fact it's in their interest to make things worse. The Palestinians are the ideal cannon fodder for the assault on western minds and values.

The world needs to wake up, because the battle to convince you that Israel is the real evil is the same tactic Hitler used to rally Germans behind his cause. He served Jews to the gas chambers and on the back of that built his power base and plunged the world into war, and for many years, good moral countries let him do it unimpeded. His successors would like the same thing to happen today and they are working hard to that end. You've been warned!
Posted by Adam The Israel Radio Guy: Israel's Anglo Broadcaster at 1:19 PM