Israel is about to once again express the ultimate manifestation of a democracy: general elections. As soon as he ends the Jewish mourning period for his late father, incumbent prime minister Binyamin Netanyahu is expected to call elections early in September. For all of Israel's neighbors this basic act of democracy would be something of huge import, with elections in the Mid East a rare, and generally tainted exercise. Not in Israel however, where regular elections, combined with a free press and a court system, are symbolic of this young country's genuine democratic nature. All Israeli's over 18 have the vote: male & female, Jew & Arab, religious & secular. Israel's often raucous Knesset is a collection of small parties with the largest holding around 30 of the 120 seats.

Israels government is therefore by nece 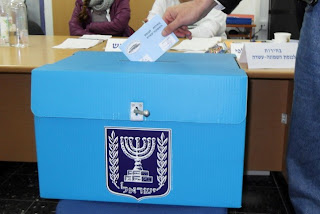 ssity always a broad coalition, often (as in the outgoing Netanyahu government) made of strange bedfellows from right and left.This is, of course to Israel's credit and is a level of democracy seen as natural in Europe & The US, but unheard of in the Mid East, it is however a democratic system that for the good of Israel needs reform. In our current system too many small parties have inflated influence, because of the need to include them in coalitions. At the same time, ordinary citizens lack local representation. Knesset members represent their parties, but not geographic areas and therefore I have no MK of my own to call when issues occur locally. Parties are often formed to represent demographic groups such as Shas (representing poorer Sefardi Israelis) or the Ultra Orthodox groups & arab parties. This representation has been important over the past few years, forcing governments to listen to the needs of these communities, but at the same time, it has allowed tiny parties, representing a small percentage of Israelis to have the ability to hold coalitions to ransom: "build here or we walk.... propose that bill and we are out".
The solution (and I have heard is that Bibi himself wants this) is to reform the system, but these very small parties will block any moves to do that, in order to protect their power base. In simple terms, any proposal would lead to the collapse of a coalition, because Shas and the others will walk out. What has been needed is a coalition of the major parties (and again I've heard in off the record discussions with people 'inside' is that of all the larger party leaders only Tzippi Livni would not 'play ball'). Such a coalition of Likud, Labor, Yisrael Biteinu, & Kadima would not need the tiny parties and would be able to pass the difficult reforms needed and then call fresh elections.
I believe as a result of this, political figures, instead of constantly setting up yet another party or Knesset list, would be forced to either form power block within the larger parties or non governmental pressure groups as happens in other democratic states. The type of system they create is open for debate: a two tier Knesset perhaps, with half the member representing geographic areas and half elected as they are today is one idea that I have heard, but whatever system is chosen, it has to happen, because the present system, while it is excellent for dealing with security and foreign policy issues, does not create governments able to tackle the various social problems that plague Israeli society.
It is incumbent on all of us to put pressure on the parties during this election cycle to work together to make this change, because this is the period when they are most open to being influenced by the electorate. This is perhaps the single most important thing any future Israeli government might achieve
Posted by Adam The Israel Radio Guy: Israel's Anglo Broadcaster at 5:45 PM